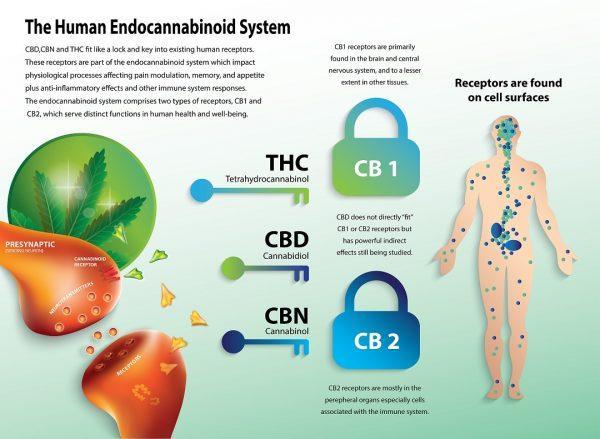 Cannabis medications work so efficiently because of the endogenous cannabinoid (endocannabinoid) system, present in all humans and many animals as well. This system consists of a series of receptors that are configured only to accept cannabinoids, especially tetrahydrocannabinol (THC) and cannabidiol (CBD). Other cannabinoids that hold promise for health care benefit exist, including cannabinol (CBN) and cannabigerol (CBG) plus others. Research continues to learn about their mechanisms of effect.

This system, an integral part of our physiologies, was discovered in the mid-1990s by Israeli researcher Dr. Ralph Mechoulam who also identified THC as the main active ingredient in cannabis in the early 1960s. Israel has been one of the most progressive nations for cannabis research and currently has one of the most advanced medical marijuana programs in the world.

Dr. Mechoulam’s world-changing research discovered two main receptors: CB1 and CB2, that are keyed to both the endocannabinoids that our body naturally produces and phytocannabinoids (plant-based) like THC and CBD.

Our bodies produce the endocannbioids just as our body produces narcotic-like endorphins. Synthetic cannabinoids, like the ones found in Marinol, also fit the receptor sites but don’t work as efficiently as the natural ones.

This research barely created a stir when first published as the whole world was still wrapped up in drug war madness. A prominent scientist discovers that our bodies not only have receptor sites cued just for cannabinoids but that our bodies produce them internally. The next step was to figure out how this affects our body’s functioning.

CB1 receptors are primarily found in the brain, although they are also both present in the male and female reproductive organs. Current research shows that THC is specifically keyed to the CB1 site. THC is responsible for the feeling of intoxication that is the most familiar aspect of cannabis. From a therapeutic standpoint, its most important effect is to modulate and moderate the perception of pain. For example, touching a finger to a hot stove sends an electrical impulse that goes from the finger to the brain. The brain replies, “ouch, hot” and the finger is pulled away.

THC moderates pain; this doesn’t mean we leave our finger on the stove, but that the intensity of the painful feeling is reduced when THC is present in the CB1 site. This mechanism of action is why THC-rich medicines are so prized by people with intense pain issues. Cannabis and narcotics are also co-agonists, which means that each of them magnifies the effect of the other. This allows people to take lower doses and still have it be effective. Additionally, CB1 receptors are not present in the part of the brain that regulates heart rate and respiration, so unlike narcotics, there is no lethal dosage threshold for THC, allowing someone to consume as much is needed for its palliative effects.

CB2 receptors are primarily found in the immune system with the highest concentration located in the spleen. There is some evidence that the receptors might also be in the micro parts of the brain’s basal ganglia, or nerve bundles. Again, a lack of comprehensive research has left many without the knowledge that should be widely available.

The CB2 receptors are keyed to CBD and works as an anti-inflammatory agent. The immune-boosting functions of CB2 are far less understood as research into CBD is just really beginning. It’s only been about five years since CBD re-emerged in the medical cannabis scene and was identified through Steephill Labs. The benefits of CBD-rich medicine, with its anti-spasmodic qualities, is one the most exciting and promising areas of cannabis medical research currently happening.

One of the other effects of CBD is that it moderates the effects of THC . It actually knocks THC off the CB1 receptor, so if someone is experiencing THC intoxication, a strong dose of CBD can counteract those effects. This is the basis for the variety of ratios of CBD to THC offered by the licensed dispensary companies in the State of Florida, called MMTCs (Medical Marijuana Treatment Centers).
THC and CBD are the two main cannabinoids that are focused on, however there are dozens and possibly hundreds more. Some of the ones that have been identified and studied include CBG, which binds to both CB1 as well as CB2 and is an antagonist to CB1, meaning that it moderates the effects of THC. Cannabichromene (CBC) is non-psychoactive and has both anti-inflammatory and analgesic properties. CBN occurs when THC degrades. For this reason, it is rarely seen in fresh cannabis and is only mildly psychoactive, having a mostly sleepy effect. Tetrahydrocannabivarin (THCV) is another cannabinoid usually found in central Asian and southern African strains that also acts as a THC antagonist. There are more cannabinoids than can be listed here and they all have the potential to be as life changing as CBD is turning out to be.

The fact that there is a system in our body that produces cannabinoids, and is specifically designed to accept just them, should be overwhelming proof of cannabis’ efficacy as a medicine. From the pain-killing effects of THC to the anti-spasmodic and anti-inflammatory properties of CBD, we have just scratched the surface of a world of possibilities. People are waking up to the benefits of these medicines as more researchers are exploring the infinite possibilities inherent in this seemingly simple plant. Future generations will look back and wonder why it took so long to figure this out. — extract from Cannabis Now, Rick Pfrommer, 2015

The Endocannabinoid System and Its Role

This information is provided for educational purposes and, in some cases, contain actual State of Florida application forms. You can be assured that the staff of Florida Compassionate Care Centers guides our patients through all aspects of the State procedures, including completion of any necessary applications.

Office Hours
Get in touch